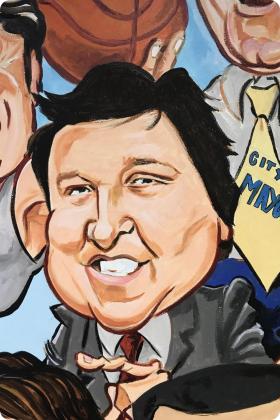 David Shablin resides in Auburn, Massachusetts and is an attorney, who is in private practice, with an office in Shrewsbury, Massachusetts. He has been practicing law for about 30 years. He was born in the “Green Island” section of Worcester, one of the five children. As a child, David walked to the Boy’s Clun on Ionic Avenue, where he played countless games of snaps, went swimming and played basketball. “It was a great place to play and it kept me off the streets and out of trouble.”

He participates in numerous fundraising events for the Boys and Girls Club, with Fran Pisegna, Tony Morano and his cousin, Brian Killelea and does so not for the recognition but because he believes in the Boys and Girls Club. Like many of the other alumni of the Boys’ Club, he credits much of his success to the life lessons he learned while attending the Boy’s Club. “The Club taught me about the importance of self-confidence, responsibility, teamwork and respect.”

His father-in-law, Bill Reidy, had his office furniture and supply company, in the old Rice Barton Building on the precise spot where the present Boys and Girls Club now stand. “My father-in-law would be so happy that the property where his business was located is being put to good use!!”

One of his childhood Friends is Rich Gedman, a member of the Boys & Girls Club Hall of Fame.