Giovani Dulcio, Youth of the Year 2010 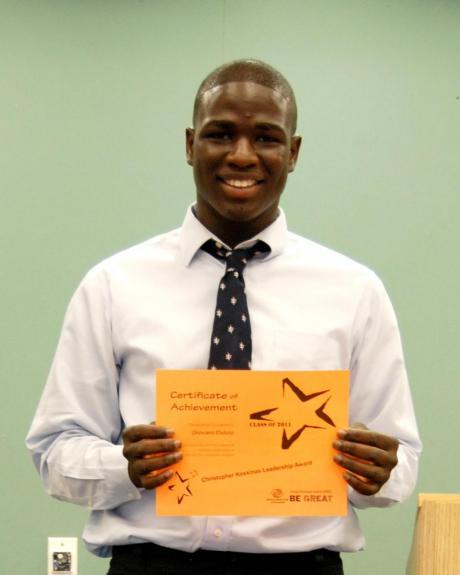 Youth of the Year Update

Gio is currently a senior at Worcester Vocational High School, and a Captain of our In ​Da Zone dance team.

The Boys & Girls Club of Worcester is proud of Giovani “Geo” Dulcio.  His second year running for Youth of the Year, he achieved the runner-up title for last year’s competition, finally securing the honor this year.  He’s the first Club kid from our Great Brook Valley Clubhouse to win this incredible award.

Geo is a wonderful young man and has so much potential.  Geo’s goal is to go to Harvard Medical School to become a Pharmacist, so he can help serve the community that has given so much to him.

Geo has been an incredible role model and mentor to his peers both inside and outside of the Great Brook Valley Clubhouse.  He’s an active participant in two different churches in Worcester where he helps facilitate Bible study classes and summer camps.  He’s also a member of Worcester’s Youth Social Justice Roundtable where youth voice their opinions about injustices in their community.  He’s been an honor student throughout the course of this first two years of high school, and has taken all college-level classes.  At school, he participates in football, track, and cross-country teams, as well as the Student Activity Board and Student Council.

At the Club, Geo is also a star! He’s the President of Keystone, our youth leadership program where members work on projects relating to academic success, career exploration, and community service.  He participates in almost every possible program offered to his age group and also volunteers for the programs that service younger youth.  He loves to participate in arts and crafts projects and our In Da Zone dance team, and teach cooking classes.  He helps his peers with their homework and computers, and always pushes those around him to do their best via his encouragement and praise.  He’s also been an integral part of the team of kids that participate in the Urban Farmers Agricultural Academy; an organic farming program that teaches kids how to grow food and about organic living.

Geo has been Youth of the Month at the Great Brook Valley Clubhouse every year since 2005 and has been their Youth of the Year for their Clubhouse for the last two years.  He’s also won the Presidential Volunteer Service awards for the last three years.  With Geo’s drive and determination to be GREAT at everything he does, we know he will go far, while sharing his dedication to serving the community!*

*Plea​se note that Geo’s Youth of the Year article was written at the time of his award.