Home » About Us » Impact » Testimonials 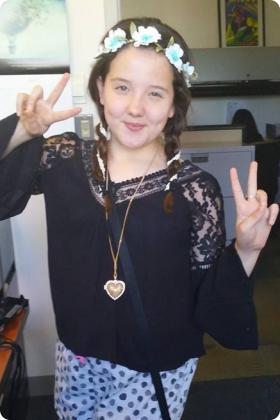 I am a proud parent of a 13-year-old Club kid. My daughter, Rowan, has been going to the Club more than half her life. I remember bringing her to the Harrington Clubhouse for the first time, when she was 6. She went to look around, and I started to call after her, "Stay where I can see you!" but then I realized that it was a safe space, where she could be free to explore. What a relief (for both of us)! Rowan started out in the School Age Child Care soon after. She blossomed - getting attention from the Club teens who worked there was especially helpful in beginning to overcome her shyness. She learned to swim in the weekly pool session, and the dance program's once-a-week hip hop class kindled her (so far, lifelong) interest in all forms of dance. The staff nurtured Rowan's love for storytelling, and had her read her "books" to the class. Even so, she was counting the days until her 8th birthday, so she could be a "real" member, and have the run of the Club.

As soon as Rowan was a full member, she joined Girls Voice, a family of girls-only programs that lets girls cultivate their leadership abilities, discuss issues that are important to them, and learn what it means to be a friend. Rowan came into her own in the program. She rose to the staff's trust in her, and began to coordinate the activities, even working with other programs to organize Club clean-ups and other volunteer projects. She also found a talent as a peacemaker, helping squabbling Club-mates to find common ground and start acting like friends again. The timid little girl who started at the Club would never have thought she could take charge like that. Rowan tried out, and was one of the few 8-year-olds chosen for In DA Zone, the Club's award-winning dance team. She kept her spot for the next five years.

Rowan is a very articulate kid, with the vocabulary of someone twice her age. She is a gifted student, and usually knows the answers in the classroom. This, combined with her "artiness" and her Club-nurtured confidence, made her an oddball in elementary school. She thought nothing of practicing a dance routine on the playground at recess, debating the finer points of Harry Potter with a teacher, or spending a free period writing a play. The kids in her class thought she was weird, and she was bullied fairly severely in 5th and 6th grades. Even though she suffered, she refused to "give up herself," as she put it, by conforming. "I don't want to act like them," she said," If I do it's admitting that being like them is better, and my real self is bad." Even so, I'm not sure she could have kept to her principles if she hadn't been a Club kid. Having the Club as an outlet, a place where she knew she would be accepted and encouraged and have friends, made all the difference for Rowan. She is now at Burncoat Middle School, in the dance program - where she has found her "tribe" among all the other arty kids. Rowan came out the other side: Because of the Club's afterschool programs, she now knows that she is strong as well as capable. Due to afterschool commitments, Rowan doesn't come to the Club every day anymore, but I know that those lessons will last a lifetime.