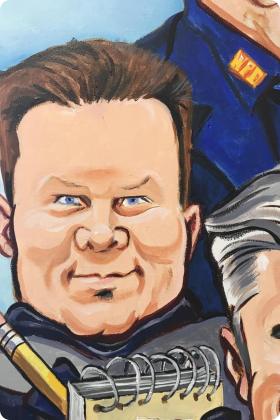 Andy Fish made his mark as a comic book and graphic novel writer and artist but as a member of the Boys Club on Ionic Avenue, he did his best to be invisible. “I was a ghost kid at the Boys Club,” he says. “I was so shy, I never spoke to anyone. I was so afraid of being noticed that if I shot a basket during a game I wouldn’t go back for a couple of days out of fear that someone would make a big deal of it.”

Andy, who grew up in the Crown Hill neighborhood, found respite in the Boys Club. “It was a place you could go and be safe,” he says. “In my neighborhood there weren’t a lot of places kids could play—I remember being chased out of everywhere except the Boys Club.”

He admits to being a bit scared by the Boys Club building. “It was huge and dark and there were long shadows everywhere.” Years later, these Gothic elements influenced his comic book art. “I’m obsessed with dark and scary things,” Andy says. He wrote his graphic novel, Dracula’s Army: The Dead Travel Fast  as sort of a Cliff Notes of the Bram Stoker’s Dracula for middle school kids.”

As a youngster Andy loved comic books. He remembers perilous trips down Main South the West Side Pharmacy to buy them. “It wasn’t uncommon that I’d get jumped on the way back and beat up,” he recalls. He attended both the School of Visual Arts in New York City and Rhode Island School of Design where he continues to do portfolio reviews there for prospective students offering guidance and critique.

Andy has contributed his artwork to the Boys & Girls Club Art in the Afternoon events. For the past seven years he and fellow comic book artist Jamie Buckmaster have taught comic art classes for teens at the Worcester Public Library.