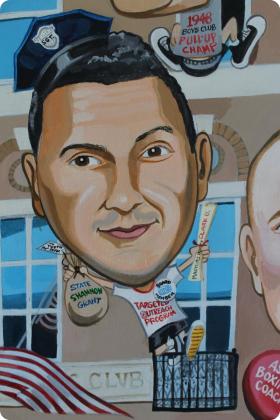 Sergeant Miguel Lopez, Youth Program Director for the Worcester Police Department, started attending the Ionic Avenue Boys Club when he was in the fourth grade. He tried a number of Club activities, but the biggest attractions were boxing and swimming. “My interest in boxing solidified after I met Carlos,” Miguel said.   He was surprised to find out how much there was to learn. “The greatest take-aways from those days were the lessons that I still carry with me.  For instance, I know that anything worth mastering, whether it’s boxing or academics, requires time, discipline and humility.  I learned those lessons at the Club”.

Miguel was assigned to the Gang Unit in 1996, and three years later started working on creating gang prevention programs with the Boys & Girls Club. Naturally, an important component of these programs have been structured recreational sports, like boxing, and especially the mentoring that comes with it.  In 2007, Miguel was appointed as youth program director, and quickly worked to formalize the relationship between the Club and the Police Department.

Today, due to Miguel’s work and vision, the Club is able to provide the nationally recognized GPTTO (Gang Prevention Through Targeted Outreach) program to youth living in the area of all three Worcester Clubs.

When asked, “what was one of your recent memories of the Club”, Miguel responded, “This year my 10 year-old son became a member of the Boys and Girls Club.  I stood next to him as they printed out his new fancy membership card.  I was instantly brought back to the day when I watched the Club worker creating my membership cards on the old-fashion hard greenish-brown cardboard using a font printing press that looked like a giant typewriter. It was kind of like passing the torch…”.