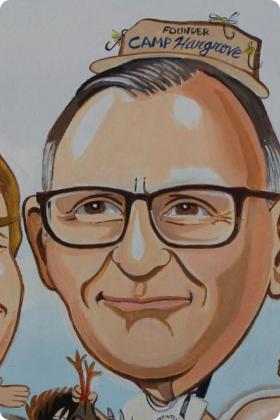 Gordon and Dorothy Hargrove have a special relationship with the Boys & Girls Club of Worcester. Their father, the late Gordon Hargrove Sr., was superintendent of the Ionic Avenue Boys Club for more than 40 years. “I was so proud of him,” Gordon recalled. “Everyone knew him.”

As a Club member, young Gordon enjoyed seeing his father at work. Even though the elder Hargrove was in charge, however, Gordon knew he was not to expect special privileges. “I wasn’t to flaunt the fact that he was the superintendent,” he said, “if I had a problem, I was to work it out like the other boys did.”

Dorothy Hargrove remembers her father playing Snaps with her at the Boys Club—but only when closed to the public. In those days before girls were allowed, she couldn’t join in the after school activities. “The building was always empty when I was there with my father,” Dorothy recalled. “I remember it as a rather imposing place.”

Taking his son and daughter along to work at the Boys Club was natural for Gordon Hargrove. “The Boys Club was the fabric of his life,” Dorothy said. “My father lived his job; he was the most dedicated man I ever met.”

Dorothy went on to a distinguished career in Worcester Public Schools, served on the city’s School Committee and spearheaded a multitude of other projects to improve the community.

Young Gordon volunteered at the Boys Club, worked at the summer camp and years later built on his experiences to develop programs for youth at Friendly House, where he’s followed his father’s example. Just as Gordon Hargrove Sr. was devoted to the Boys Club, his son has also served the youth of Worcester as executive director for Friendly House or more than 40 years.

For their outstanding contributions in the field of education, the Boys & Girls Club of Worcester is proud to welcome the Hargrove family into the Hall of Fame.