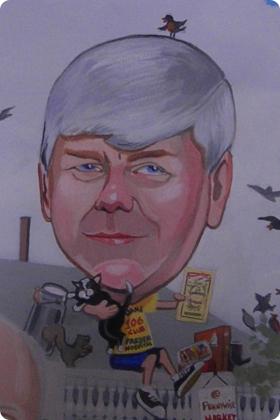 At 12 years old, he was playing snaps at the Boys & Girls Club of Worcester; at 19 he was running his own store, and today he owns one of the oldest convenience stores in the city, Pennywise Market. Gerry grew up in the Lincoln Street area of the city and attended the Lincoln Square Clubhouse during his middle school years. He credits the Club and the staff with keeping him out of trouble and keeping him moving in a positive direction in life. While many of his friends were getting mixed up in trouble, Gerry was busy at the Club every week playing basketball, swimming, taking typewriting lessons, and in his  favorite spot in the Club -- the games room -- playing snaps. Gerry is grateful for his involvement with the Club. Not only was it a place where he made some lifelong friends, like Sonny Stokes and Kenny Linder, but the Club also taught him about ethics, tolerance, acceptance of everyone, and about being a good person.

With the Club keeping Gerry on course and out of trouble, Gerry was bit by the entrepreneurial bug at an early age and was very involved in his family’s business, Hilltop Farms, which started the 1st gallon-of-milk business on the East Coast. Gerry was busy working at stores during his time at the Club, began running them at 15, was building stores at 17, and shortly after graduating from Commerce High School, owned his own store at age 19, when he bought the building that housed the former A&P Market. He has owned that same building, and has run Pennywise Market there, for 49 years. Pennywise has become something of a financial center in the Main South area of Worcester. Many local residents use the store on a daily basis, to cash their payroll checks, pay their utility bills, and send money to loved ones. Gerry is also a founding member of the 406 Club (named after Red sox legend Ted Williams and his highest batting average) at the Dana Farber Hospital in Boston; the club was able to build a brand-new wing onto the facility.

It was a conversation with Sonny and Kenny, both also very successful alumni and Worcester-area entrepreneurs, that sparked his interest in our Club and giving back to something that gave him so much. With school funding pulling the plug and cutting our kids’ music, arts, and other extracurricular activities, Gerry knows it’s important to support the Boys & Girls Club of Worcester. He feels the Club fills that void and gives our kids the support and opportunities that they wouldn’t have otherwise. He says that nowadays, even more than before, our Club plays a vital role in keeping our kids off the streets and out of gangs. The Club gives them that “home” feeling that some kids aren’t fortunate enough to have at home. They have staff here who truly care about them and their well-being.

When Gerry’s not busy overseeing his business, he splits his time between his farm in Sutton and his family beach house in Kennebunk, Maine. He loves farming, landscaping, the outdoors, reading, and traveling throughout Europe and New England. He also loves spending time up in Maine with his wife, Elaine, and their beloved dog. They enjoy going to the theater, dining out at new restaurants, and spending quiet time on the lake by their home. They even owned race horses at one time. Gerry and Elaine have been married for thirty-five years. They have four children, six grandchildren, and three great-grandchildren.

Gerry’s induction into the Hall of Fame means a lot to him. He is thrilled and honored to be included in a group honoring such distinguished individuals and he looks forward to his continued support of our Club and our kids. In his own words, “If a child comes to the Club – it’s the beginning of a wonderful future, just like your new logo states. It’s a start in the right direction and by supporting the efforts of the Club, I’m not only giving back to my old Club, but I’m also  investing in the futures of the kids who come to the Club every day, and that right there, means so much to me.”