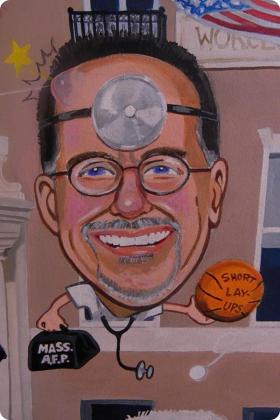 From shooting hoops and swimming laps at the Ionic Ave. Clubhouse to serving as the vice chairman of the Department of Family Medicine and Community Health for UMass-Memorial Healthcare, Dr. Dennis Dimitri has achieved some professional and personal milestones, which he credits to his involvement with the Club as a youngster.

Dennis grew up in the Shawmut Street area of Worcester and learned about the Club from his father, who attended the Club in the 1930’s. His father told him wonderful stories of the Club and his experiences there, and how integral it was in his becoming a part of the American melting pot. Dennis attended the Club from the time he was 11 until he graduated from high school. During that time, he made a great number of friends, including Tom Christo, Matt Sturgis, and Tom Pappas, all of whom he’s still friends with today.

At the Club, Dennis could be found in the pool or in the “cage.”  The “cage” was the area of the Club where the kids played basketball. Dennis and his friends learned how to make a successful layup in a precise fashion. If they weren’t precise enough, they would end up running into the out-of-bounds line, which was a wall. In addition to playing basketball, Dennis loved to swim, and learned at the Club. He also tried boxing, but ruled it out as a hobby after taking a hard shot to the head during one of his first training sessions for the Golden Gloves.

After graduating from Doherty High School, Dennis went on to study medicine at Clark University, and at George Washington University in Washington, D.C. After completing medical school, and his residency at UMass, Dennis started his private practice in 1982 in Worcester and continued it for the next sixteen years. He eventually wound up at UMass-Memorial Healthcare and has been a central part of their team since 2006 when he became the vice chair of the Department of Family Medicine and Community Health.

Dennis has long been well-known in the medical community in Worcester. He has held leadership roles, including becoming president of the Massachusetts Academy of Family Physicians in 2010. His work there has contributed to landmark healthcare legislation in Massachusetts, and has been one of the models for the recent national healthcare reform.

Dennis has many friends, and in his spare time, when he’s not caring for his patients and mentoring younger medical professionals, Dennis and his wife Tamara enjoy playing tennis, skiing at Killington in Vermont, and out west in Utah. They also love to travel across the country and the globe on adventure vacations (such as white water rafting through the Grand Canyon or trekking on a glacier in Argentina) and they enjoy visits to capital cities in foreign lands, with Barcelona reigning as their favorite thus far.

Dennis was equally honored and surprised to find out he was going to be inducted into the Alumni Hall of Fame by the Boys & Girls Club of Worcester. He credits much of his success in life to the things he learned while attending the Club as a young boy. The Club taught him the importance of confidence and believing in himself. It also taught him the fundamentals of teamwork, hard work, and the power of knowledge, all which have been crucial in his field of medicine. He also knows how important the Club is and how important it is to help kids focus on achieving great things in and out of school. “The new facility is a great testament to the fact that Worcester clearly knows the extraordinary work this Club and its staff do for all these kids.”