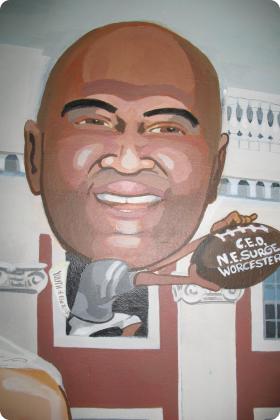 The Club was a safe haven for Roy Lucas when he was a boy. He recalls a special bond that he had with Paul Mina, the director of the Lincoln Square Club, who was a great mentor to him when he was a boy and who offered many lasting lessons about responsibility and respect for others. Mr. Mina also gave Mr. Lucas his first job at the club at the tender age of 11.

Mr. Lucas maintained his membership in the Club at Lincoln Square right through college, and even worked in the camps for the Club in the summers. That he excelled as a Club member is indicated by his awards. He was named Junior Boy of the Year, Senior Boy of the Year and none other than Youth of the Century.

The Club meant many things to Mr. Lucas. It was more than a second home to him as he learned about the arts and sports at the Club and also saw that avenues of opportunity were available or a kid searching for a path in life. He became an avid basketball player at the Club, for example, which got him into college.  The Club was also a powerful educational force for Mr. Lucas. He says that the Club cuts across social barriers, such as culture, ethnicity, and economics, and teaches kids the fundamental message that they can do anything they put their minds to. It all starts with people who invest their time and energy into supporting and encouraging a kid. That’s what the Club is all about to him.