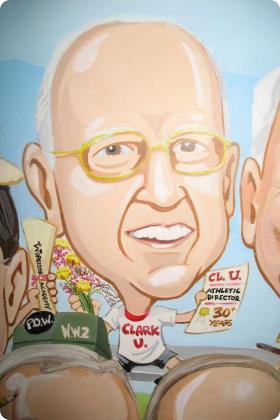 Russ has spent his whole life around athletes and locker rooms. As an acolyte of Coach Charlie Bunker, with his best friend Paul Rittburg he spent many a happy hour on the Club’s courts. All the practice must have worked because he was a member of Ionic Avenue’s outstanding varsity basketball team for two years. It seems however, that Russ took something else from the Club. It was here that he met his wife Katherine. They were married for 67 years.

Even in retirement, Russ enjoys basketball, baseball, golf and tennis. “Everything that I was involved with at the Club contributed to my good fortune for the rest of my life.”

Russ lives with his daughter in Leicester. He and his wife Katherine raised four children – John, David, Nancy and Paul.