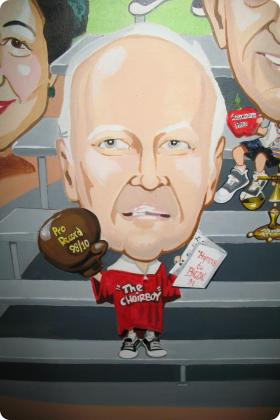 He started boxing in the Marines as a way to get off the base. In Quantico, he was assigned to special service and captained the Marine boxing team. He soon discovered that he was blessed with a lightning-quick left jab and that boxing was what he did best. Don was managed by Olympic silver medalist Harry Devine, and his first bout as a pro came in June of 1947. He won that fight – one of 98 he would win in his career. He lost only ten.

Don was the New England Welterweight Champion in the 1950s slugging his way down the East Coast. Nicknamed “The Choirboy” because of his participation in the Park Avenue Methodist Church choir, he was publicly hailed by the pastor of that church in 1948 for his “high moral standard” and “exemplary character.”  The locals loved him, as much for his boxing prowess as for his reputation as the consummate gentleman.

The biggest bout of his career came on February 28, 1952 at the Boston Garden. His opponent was Kid Gavilan from Cuba, the tenacious world champion. “At the end, a lot of people thought I might have won the fight, but you have to remember that when you are fighting a champion, it has to be a clear-cut victory. Champions seldom lose on a decision.”  When the split decision was announced, the officials were booed loudly by the spectators.

Don hung up his gloves in 1956. He worked for many years as an industrial engineer at Parker Manufacturing, until his retirement.