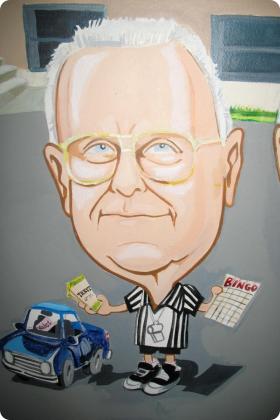 First as a member, and after 50 plus years as a volunteer, John has been a fixture at the Boys & Girls Club of Worcester. As a youth, he has fond memories of walking to the Club (now many kids are bussed), carpentry and printing classes, the cage for basketball, ping pong and snaps on the first floor, swimming balaki, and tickets costing five cents a month or fifty cents a year.

It is almost as though John never left the Club. In the early 40’s, he began officiating youth games as a volunteer. By 1943, he had passed the referees exam and became a member of the International Association of Approved Basketball Officials. After a three-year tour of duty with the 78th Infantry Division fighting in Europe, he returned to Worcester to take up where he had left off. Since that time he has been calling games for semi pros, church leagues, Y games, grammar schools, high schools, and colleges. He has called more than 7,000 games over the last five decades, with more yet to be added.

John’s contributions to the Club have been more than just refereeing. He has parked cars and collected tickets for the golf classics that were held at Pleasant Valley Country Club, worked bingo games every Sunday for years, announced the exhibition boxing matches, and helped to open Camp Hargrove.

In 1998, as the country’s oldest certified basketball referee, John went to Denver as a finalist for the MasterCard All-Star Team of the Boys & Girls Clubs of America and was honored at the National All-Star Game. Up until his passing in early 2009, you would still be able to find John at the golf course, or the basketball court, still playing, still refereeing, and still contributing.