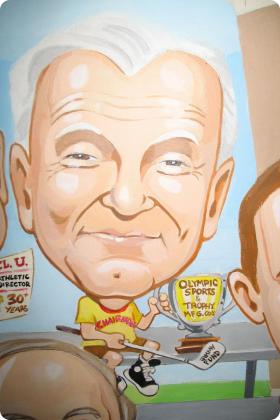 Eli is a Native of Worcester, born in 1917. He moved to Spencer in 1985. He is one of 10 children. Eli attended the Ledge Street Grammar School, Grafton Street Junior High, and Commerce High School. During his school days, he played varsity basketball, and was sports editor of his high school paper, The Commerce Mercury. At the Ionic Avenue Boys Club, he played varsity basketball from 1935-1936.

With his brother Archie, Eli started Olympic Sports and Trophy Manufacturing Companies in January, 1939. Like many young men, in July of 1941 he joined the US Army as a private. Five years later, in 1946, he was discharged from the US Air Corps with the rank of captain. In 1947, he married Rebecca Schwartzberg. They have eight children and fifteen grandchildren.

Eli’s commitment to Worcester has been notable. He chaired the 1939 Finnish Relief Fund, raising funds at a basketball tourney, and played softball with Merrill & Usher in 1940. He was president of Civitan Club, Worcester branch, of Civitan International, chairman of the Jimmy Fund golf tournament, and chairman of the Arthritis Golf Day at Pleasant Valley with Arnold Palmer as the main attraction.

Even after he left the Boys Club, he was able to maintain contacts with many of the former members as he played with various teams; the Italian-Spaghetti baseball team (Dartmouth A.A.), St. Spyridon basketball team (Greek Team), Polish Aces of Webster, and the Jewish War Veterans of Worcester (basketball & softball). The Dorrance A.C. basketball team of 1936-1937, composed of Irish, Polish, and Swedish players (an unusual mix for the era), won the St. Mary’s tournament.

“Because Worcester had a very mixed ethnic environment, especially at the Boys Club, I was able to mix with all of them. It was indeed very enjoyable to compete with them in the game room, playing snaps and ping-pong. I learned how to play basketball in the downstairs “cage,” bouncing off the four walls. I was eager to get to the upstairs gym to get in the tumbling class. Before the Saturday afternoon movies, I visited the library across the hall from the movie room. I enjoyed what I thought was one of my best experiences – a Hot Water Shower. As a kid, our families mostly lived in the area of similar beliefs. It was at the Boys Club a kid learned how to live with all the other kids, regardless of religious beliefs.”