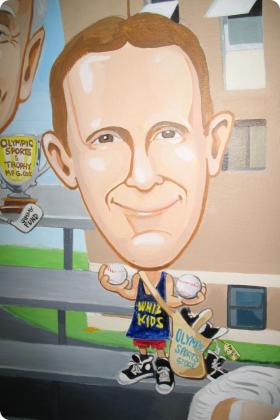 For more than 36 years, Charlie was a teacher and coach at the Ionic Avenue Clubhouse. In that time, he drew thousands of kids from the streets to the Ionic gym and introduced them to the joy of competing. It is estimated he earned more than 2,000 victories as a coach with the seniors and Whiz Kids teams, and helped develop many future hoop stars in the area.

Although associated more with basketball, Charlie played outfield on the North High baseball team. Because of an injury he began pitching. “One day I pitched a doubleheader,” he once said. “And do you know, I pitched the first game with my left hand and the second with my right. And I wasn’t at all tired – I used only one arm per game.” At North, he loved other sports as much as he did baseball, in fact, he was a six-letterman.

One of his favorite sports was basketball, and he devoted most of his adult life to its development. He inherited the Clubhouse coaching job from William Gilliam when the latter became superintendent of the Ionic building. He later became the Worcester Boys’ Club athletic director. Since his initial campaign as head coach in the winter of 1930-31, he experienced brilliant success and an occasional lean year.

Charles Henry Bunker never lost track of the human element. One of the Club rules was that the boys had to wear sneakers in the gym. Unfortunately, many boys did not have sneakers, so Coach Bunker would send them to Olympic Sports on Main Street to choose a new pair. The boys had always assumed that the store had donated the sneakers. It was not until many years later that it was learned that Coach Bunker had paid the store 25 cents a week for years to buy sneakers for his boys.

Charlie’s greatest team was possibly the 1941-42 array, which compiled an astonishing record of 32 wins and no defeats.