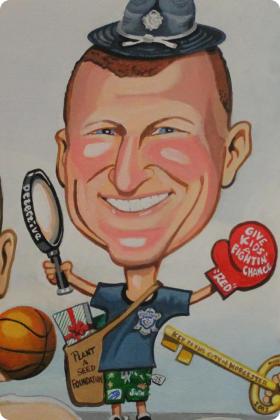 Mike Sampson, a Sergeant with the Massachusetts State Police, has many memories associated with the Boys & Girls Club. There was the time he and his father won the father-son free throw contest, countless games of snaps and the sportsmanship award he won for a boxing match. "I made life long friends, learned respect and how to treat people equally," said Sgt. Sampson.

As a teenager, he'd walk five miles to the Club to train with boxing coach Dick Hochowski. "I would train and spar and the run home. I knew I was ready to fight when I could make it all the way home without stopping," he said. The coach, who inspired great respect from the young Sampson, gave him the nickname "Red". "The older kids would tell me to let him know that I had a name, not a color," the Sargeant said. "I never did."

After becoming a state trooper, Sampson gave back to the Club. He approached Judge Luis Perez who formed a committee to raise money through a yearly boxing event, which later developed into "Give Kids a Fightin Chance". Sometimes Sampson would drive his cruiser to the Great Brook Valley branch of the Boys & Girls Club before going to work, and take kids for a ride around the Valley. "I would talk to them about any issues that they might have," he said. He brought kids from Main South to the Great Brook Valley branch to show them that although they came from different neighborhoods, they were all the same". Sampson also serves on the board of the Plant a Seed Foundation that supports the Student Trooper program and delivers Christmas presents to Club members. The Sargeant modestly downplays his accomplishments. "There are so many people who deserve recognition," he said when informed about his nomination for the Hall of Fame. The Boys & Girls Club is honored to welcome Mike Sampson for his outstanding support.