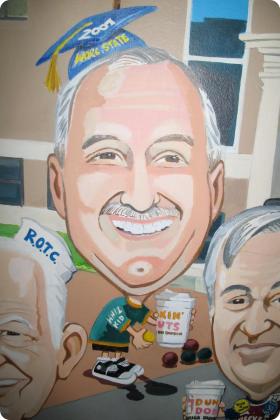 He has worked for the Mass Pike, in construction and banking, has owned his own business and has helped run an extremely successful Dunkin Donuts franchise.  He’s a true jack-of-all-trades and tonight we are honoring Chick Simon for his outstanding contributions to the Boys & Girls Club of Worcester.

Chick Simon attended the Ionic Ave. Clubhouse back in the mid-40s and was extremely active with sports.  He was a member of both the Ionics and the original Whiz Kids Basketball Teams and used to shoot hoops, play snaps and ping pong with his best Club friends, Vic Vezoulis and Charlie Chello.  He loved coming to the Club and just being there with his friends and fondly remembers Coach Charlie Bunker’s inspirational talks with him and the rest of his fellow teammates.  Being a Club Kid meant having something to do when there wasn’t anything to do, a place where he was safe and was kept busy and a place where he could make new friends.  Chick graduated from South High School in 1952, completed all his coursework at Worcester State College in 1956 and received his Bachelor’s Degree in 2007.

Throughout his life, Chick has held numerous positions across a broad range of industries, including working for the Mass Turnpike, working in banking and    construction, owning his own mobile home and boat financing business and  eventually starting an extremely successful Dunkin Donuts franchise with some associates, including his brother Gabe, who is also a member of our Alumni Hall of Fame.

Chick is now retired and currently resides in Shrewsbury, MA.  He enjoys sports, as he always did as a Club Kid and is a huge fan of the New England Partiots and the Boston Red Sox.  In addition to being an avid sports fan, Chick is very active with the Shrewsbury Lions Club and with Eye Research.  Chick and his late wife, Anne Marie, are the parents of three lovely children, Kevin, Beth and John and are the proud grandparents of three grandchildren.

Chick Simon has shown everyone how influential this Club can be for our youth.  He took all that he learned here at the Club and applied it to his every day life and used dedication, perseverance and passion to over time become one extremely well-rounded, very genuine, tremendously successful    businessman and Club Alumni.

We honor Chick, who shows our kids that you should never give up on your goals, always give 100% in everything you do and that you should always, always believe in yourself and your dreams.