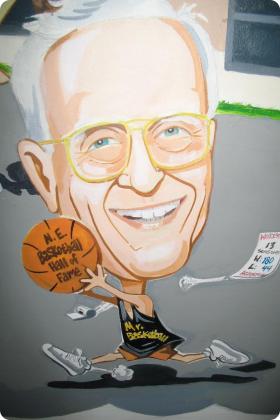 He was only in third grade at Thorndyke Road School, but the Boys Club’s legendary coach Buster Sheary saw something special in the slim young man shooting hoops. Buster introduced Dee to the game that would become his life.

Dee was the University of Connecticut men’s basketball head coach from 1969-1977, compositing a 120-88 record over eight seasons. His final game was his 300th career win versus 132 losses during 21 years. He won numerous titles including the Yankee Convergence Championship, New England Coach of the Year twice and earned a bid to the NCAA Tournament in the 1975-76 season, where the Huskies made it to the Sweet 16.

As UConn’s associate director of athletics for development for 15 years, Dee established, developed, and marketed the UConn Athletic Development Fund. The fund has generated nearly $80 million in annual giving, special events and capital projects since initial drive in 1978-1979. Dee is a member of the New England Basketball Hall of Fame.

Dee and his wife Virginia live in Stoors, Connecticut and have seven children.