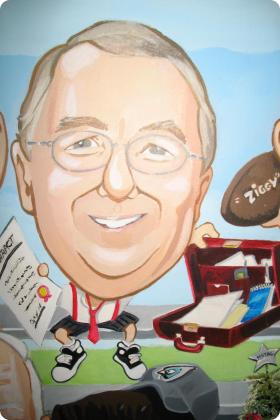 The first five years of Tony’s relationship with the Club were all wet. His most vivid memory of being a Club kid was opening the swinging doors to the locker room and smelling the chlorine from the pool at Lincoln Square. One of his proudest moments was finally being able to swim the width of the pool.

From persistent paddler to professional practitioner, Tony has made his mark in the city of Worcester. An attorney for the firm Fletcher, Tilton & Whipple, he chairs their trust & estates practice. Tony received the Community Service Award from the Massachusetts Bar Association in 2002, and was elected as a fellow of the American College of Trust and Estate Counsel in 1986.

For decades, Tony has been an important figure in the philanthropy in Central Massachusetts. He has served as a trustee for more than a dozen local organizations, including the Worcester Art Museum, the Ecotarium, the United Way, Bancroft School, Becker College, and the Middlesex School in Concord. Tony currently serves as a trustee for many other organizations, such as UMass Memorial Healthcare, the Massachusetts Health Care Security Trust, and Clark University. The Club is most proud of Tony’s efforts on our own capital campaign to build our new Clubhouse as a component of the Gardner-Kilby-Hammond Revitalization Project. We recognize and applaud the advice, counsel and assistance he has given, not only our Club, but also many other worthy causes throughout Central Massachusetts.