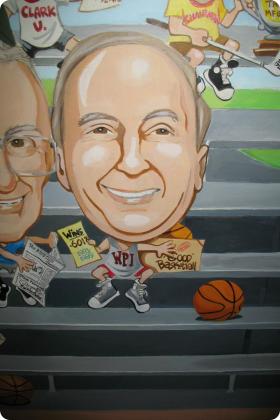 If you were a member when Ken was and wanted to play some basketball, he and his friends were the go-to guys. “We always knew where the good basketballs were located. The first thing we always did was get a good ball before the older kids could get them.” At last, the secret is out.

As another of Charlie Bunker’s pupils, Ken’s favorite memories were of getting to the Club and going directly to the gym to play basketball. “We would play for hours. If it was a Saturday, we would take a break, play snaps and then go back to playing basketball.”

A former head coach of the Worcester Polytechnic Institute men’s basketball team for 26 years (1975-2001), Ken’s teams won 293 games. From 1981-1989, his teams had a .601 winning percentage. That period is considered the most successful decade in a major sport in WPI history. He has also operated the WPI basketball and soccer camp for 26 years. President of the Worcester College Coaches Association, Ken has served as the President of the National Association of Basketball Coaches (2003-2004) and is a member of the National Basketball Hall of Fame’s board of directors.

Ken’s professional career has been entirely involved in college athletics. At Leicester Junior College, he was All American in basketball; All East First Team at the University of Buffalo; and drafted by the Buffalo Braves of the NBA. “Any achievements that I have accomplished have resulted from my interests in athletics. That love for sports started at the Boys Club and was continued through high school and college. It was the beginning for me to learn what it meant to be a member of a team and how you had to work together to be successful.”

Ken and his wife Susan live in Worcester, where they raised two sons – Christopher and Scott.