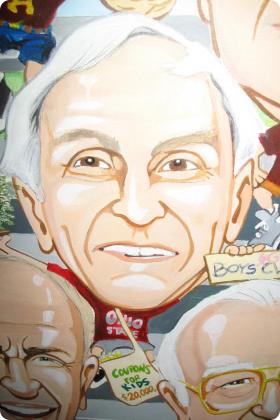 Although he did not grow up in the Club, you would never know it from the level of commitment Dave has shown over the years. For 32 years, he served as an enthusiastic member of the board of directors. During his tenure as board president (1979-1983), Dave piloted the Club through the transition from boys only to boys AND girls. A mementous time indeed!

Dave’s leadership and guidance was instrumental in establishing a revitalized core of Club volunteers. He personally recruited some 45 corporators, and many of those he enlisted are still serving the Club today. All board committees were energized and active and a new public relations committee was empaneled.

In the 1970’s, the Boys & Girls Club of America instituted a nationwide fundraising program called Coupons for Kids. While many other Clubs did little with the idea, Dave saw the potential and almost single-handedly raised $25,000 in five days. Our Club was second only to Chicago, IL. Dave’s devotion to the Club continues to this day. Each Christmas, he donates the proceeds from the sales of his Christmas trees to our Club.

Dave played four year of college football including one year at Ohio State for the famous coach, Paul Brown. He received his PhD from Rensselaer Polytechnic Institute. He served as a trustee of American Folk Art Museum and is a member of local and regional school committees. A licensed professional engineer and national president of American Society for Metals (1981-1982), Dave started a business in 1962, MMR Group, that is still going strong in 3 locations: West Boylston, Hartford, Connecticut and Wilmington, Delaware.

Dave lives in Princeton, where he and his wife, Barbara, raised three children – Stephanie Opalka, Lisa Begley and Peter Krashes.