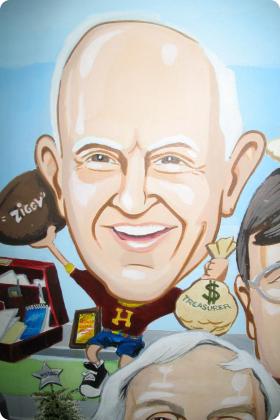 Jim’s affiliation with the Boys & Girls Club movement goes back more than 55 years. He worked at the South Boston Boys Club all four years of college. He was probably the only Club Santa Claus who moonlighted as Harvard’s varsity quarterback (nicknamed “Ziggy”). Jim coached basketball, worked the game room, and assisted in the boxing program whose members appeared at the various veterans’ hospitals around Boston. At that time, some of the kids in the Club included Mayor Ray Flynn, the late William McDonough from the Boston Globe, and Bill Bulger, President of the University of Massachusetts.

When Jim came back to Worcester, his mentor -- and later business partner at Kinsley & Adams -- Ken Higgins, was the president of the Worcester Boys Club. When Ken requested that Jim get involved, he enthusiastically did so. Jim went on to be president, and treasurer, and served on the Board of Directors for 40 years. In 1982, the Worcester Boy’s Club Alumni Association presented him with The Reginald Washburn Award. In addition to his success at Kinsley & Adams, Jim has served as senior vice president of Smith Barney in Worcester since 1981.

In 1955, Jim married Maryanne (Donoghue) from Milton, MA. They met in June, 1953 at the Wachusett Country Club at a wedding reception. It was held on a Monday because the wedding had been postponed due to the tornado that had just devastated Worcester. They will celebrate their 48th wedding anniversary next month (June 2003). They have four children – Jim, Rebecca, Rachel, and Dan; and thirteen grandchildren.