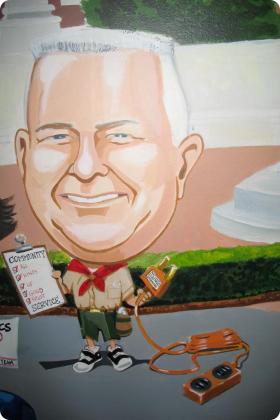 Ted Coghlin’s commitment to service initiatives within the Worcester community began early in his life. He is dedicated to this community, and enjoys sharing his time, as a long list of organizations and programs can attest.The long list of organizations and programs he has served throughout the years is evidence of his dedication and his joy in sharing his time:The Boy Scouts of America, Boys & Girls Club of Worcester, United Way of Central Massachusetts, City of Worcester Citizen’s Advisory Board, and Shrewsbury School Building Committees are just a few of the organizations that have profited from his expertise. Ted is devoted to serving the community, his profession, and the Boys & Girls Club of Worcester.

Ted has served many varied community organizations; however, his favorites serve youth. As a youth, he was a member of the Boys & Girls Club, was active in Boy Scouts; played football, basketball, and baseball; and during summers was a resident camp counselor.

He has been a town meeting member for over 35 years and is a member of the Shrewsbury High School Jobs for Bay State Graduates program. In addition, he is a past chair of the building planning committees for the middle school, Spring Street, and Floral Street schools. He is a past chair of the School Needs Study and past vice-chair of the Municipal Office Committee and the Donahue Rowing Center.

Ted has a long list of civic and community accomplishments. Today he chairs, is president of, or is a director of The National Electrical Contractors Association, The Worcester Vocational Schools, The Central Mass Regional Employment Board, and The Mohegan Council Boy Scouts of America. In his professional life, he is President of Coghlin Construction Services, Coghlin Electrical Contractors, Coghlin Network Services, which have served Worcester area businesses for over 117 years, through four generations.

Ted has been honored many times by the Junior Chamber of Commerce, The Town of Shrewsbury, WPI, and has won the Boys & Girls Club Honor Medal and Stoddard Award, as well as the Silver Beaver and St. George Medal from the Boy Scouts. He has won the McGraw Medal by the National Electrical Contractors, and an Honorary Degree from Anna Maria College.

Over the years, Ted served on many committees as a director of the Boys & Girls Club. As budget constraints forced the consolidation of facilities to the Ionic Avenue Clubhouse, Ted chaired committees to plan the best method and subsequent change from the Lincoln Square building to a vocational school classroom complex.