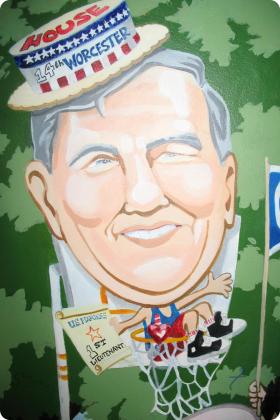 A graduate of Sacred Heart Academy, he served in the U.S. Marine Corps during World War II. In the European Theater he received the Silver Star, the Bronze Star (cluster), and the Purple Heart, as well as service awards from the U.S. Marine Corps Al Banks Awards. Robert was discharged as a 2nd lieutenant.

He carried his Club experience in basketball into his adult life, playing for a semi-pro basketball team, which won the 1950 N.E. Championship. He coached basketball at the Elizabeth Street Grammar School, and for the Standish Café.

Robert Bohigian was elected in 1949 as State Representative for the 17th Worcester District. During his 32 years in the Massachusetts House, he served on both the Ways & Means Committee and the Rules Committee.

He has been recognized for his accomplishments by the Boys & Girls Club of Worcester, the U.S. Marine Corps, Connie Mack Little League, Worcester State College (1986), the Worcester Democratic Committee (1991) and Sports Alive (1992). He was involved with East Side Post 201 of the American Legion, the Purple Heart Association, the Worcester Veterans Council, and the Worcester Boys Club Alumni Association.